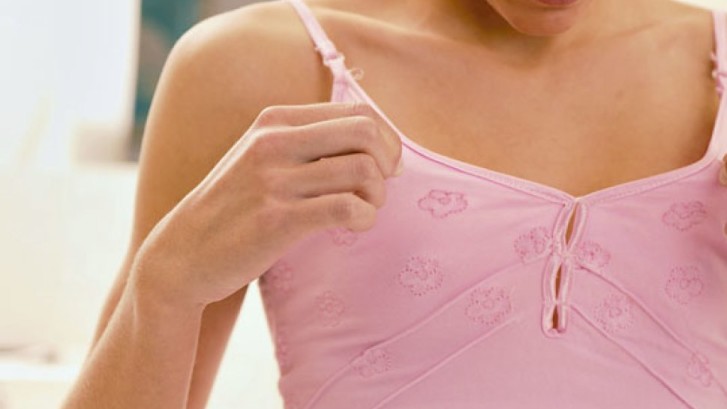 WHEN VETERAN WOMEN’S health journalist Catherine Guthrie found a lump above her left breast in 2009, the then 38-year-old tried hard not to freak out. But having already survived extensive back surgery to correct scoliosis as a kid and armed with a deep understanding of the ins and outs of breast cancer from her work, she dreaded what was to come. “Now, I’d been pushed out of the press box and onto the playing field,” she writes in her new memoir, “FLAT: Reclaiming My Body from Breast Cancer.”

That transition from knowledgeable commentator to participant in the drama of breast cancer thrust Guthrie into a “surreal” world of treatment, medical mistakes, complications and anxiety. It also transformed her body and forced her to reassess aspects of her identity; as a queer woman who’d come to terms with her sexuality a decade and a half before her diagnosis, Guthrie had already weighed what it meant to be a woman from various perspectives, but the decision she faced to either reconstruct her breasts after a double mastectomy or leave her chest flat was a different kind of reckoning, and one that many women with breast cancer face regardless of their sexual orientation.

One of breast cancer’s harshest cruelties is how it can impact a woman’s identity through the surgical restructuring of the chest. It also forces patients to make a series of life-altering decisions in quick succession. While many of these decisions revolve around treatment plans, such as whether you’ll need chemotherapy or radiation, some of them will leave lasting scars and reminders of the cancer journey and raise some difficult questions: Lumpectomy or mastectomy? Reconstruct or go flat? One breast or both?

It can be truly overwhelming to wade through all of this when you’re newly diagnosed and in shock or emotional. “These women come in, they’re very frightened. They’re being asked to make very large decisions without time to sit and really settle with it,” says Dr. Patricia Clark, a breast surgeon at Ironwood Cancer & Research Centers in Scottsdale, Arizona. Therefore, it’s incumbent upon the breast surgeon to “take quite a bit of time interviewing them, trying to pull them out of this adrenaline-soaked condition that they’re in where they’re making fast choices and a lot of times are looking for the simplest, easiest option just because they’re stressed,” and want to get it over with.

But your surgeon should be asking about your preferences. Because in many cases, there is room for patient preference. Particularly when it comes to the decision of whether to reconstruct a breast or breasts after surgical removal by mastectomy, you should know that you have some options. Reconstruction (and there are various ways to approach this surgery that each have their own pros and cons and potential complications) is one. Going flat is another.

However, sometimes patients don’t have an opportunity to voice a preference, or their surgeons don’t listen to what the patient says she wants. Guthrie recently wrote an investigative piece for Cosmopolitan magazine that found some cases where surgeons had disregarded patients’ wishes to go flat and left skin as they would for patients having a reconstruction. This is not how it should go, Clark says. “If the patient wants to go flat, the surgeon should respect that and do it. We, as surgeons, should do the best job we can to make that [patient’s chest] smooth and aesthetically pleasing.”

Clark says that the tendency of some surgeons to automatically assume that reconstruction is desired may be the result of medical societies trying to improve the availability of such procedures for all women. “Reconstruction is not offered in a lot of the United States because of a lack of resources and sometimes a lack of education on the part of the breast surgeons. Sometimes there’s a lack of access to plastic surgeons, so our [medical] societies have been pushing for breast surgeons to make sure we offer reconstruction and plastic surgery consultations.” But this can result in “some women feeling a little pressured by us in that way.”

Guthrie adds that she sees a cultural element at work in the push to reconstruct. “In breast cancer care, there is a pressure to reconstruct, not because doctors are malicious or even misogynists, but because doctors are working within our dominant cultural framework of women being valued from a male gaze.” In conventional society, a woman’s beauty is often bound up in her breasts “so when a woman with breast cancer walks into a surgeon’s office and asks for a mastectomy, my thinking is those surgeons see this woman on the brink of losing her self-worth. Breasts are a woman’s currency in our society.” In an effort to protect that patient, these surgeons may encourage reconstruction as part of “an unconscious bias among physicians to want to protect women from that loss.”

For Guthrie, going flat was the right choice and her surgeon honored her decision. As an avid yoga practitioner who finds peace in headstands and strength in being physically active, Guthrie didn’t want additional surgery cutting into muscles and potentially altering her range of arm motion and upper body strength. Still, it hasn’t always been easy and she has days when she misses her breasts, but she says she’s “thrilled with where I am now. But I want to express the ability to both be happy with being flat while also being sad that I don’t have breasts. Those things coexist for me, and I think they do for a lot of women in my position. I think we need to talk about that instead of sugarcoating it and saying, ‘you’re going to make this decision and you’re just going to be thrilled from day one and you’re never going to think twice about it.’”

She says humans are too complex for such one-dimensional expressions and that it’s OK to feel conflict about this decision because it’s a big one. For some patients, going flat might not be the best option, but she’s quick to add, “I’m not anti-reconstruction; I’m pro-information. Women can’t order something if it’s not on the menu. And they want ‘flat’ to be put on the menu.”

Dr. J. Jaime Alberty, a breast surgical oncologist at the Dubin Breast Center at Mount Sinai Hospital and assistant professor of surgery at the Icahn School of Medicine at Mount Sinai in New York, agrees that the decision to reconstruct or remain flat should be the patient’s, and making the right decision can help some patients redefine their relationship with their body. “Some women are choosing to skip reconstruction and get very elaborate tattoos and body art. They’re looking at the scars as empowerment.”

For others, restoring what’s been lost is the right approach for mental health. “You want someone to get out of the shower and when they go to the mirror to brush their teeth, they shouldn’t be looking away and they shouldn’t always be reminded of this cancer,” Clark says.

But Alberty says it’s not safe to make any assumptions about which patient wants what. “There are misconceptions out there that younger women want to get reconstructed and older women don’t,” he says, noting that he recently had an 82-year-old ask for reconstruction. “I’m not someone to tell her she can’t have it,” as long the patient is healthy enough for the surgery. “At the end of the day, as long as we’re doing an oncologic operation that’s safe in terms of the cancer, it’s really up to the patient.”

Just as breast cancer is not a single disease, each individual with breast cancer has her own life, goals, ambitions, habits and values. What’s important to you and what do you want the rest of your life after you finish active treatment to be like? Is having breasts important to you, or does going flat feel like a better option?

In some respects, Guthrie says these sorts of questions felt like familiar territory because she’s queer. In figuring out her sexuality, Guthrie had already grappled with what it means to be female and how that identity can take a range of forms. “When I came out as queer in my 20s, I stepped outside of a heteronormative perspective on the world. And in being in a same-sex relationship, you think about everything differently when it comes not only to sex, but bodies and relationships. And you build everything from the ground up on your own terms and with your own rules. Everything is up for grabs in a way that it is not for cis-gendered heterosexual couples. And because I’ve had 15 years of thinking outside the bounds of heteronormativity, I was well-positioned to think about my breasts in a very different way than the average cis-gendered woman walking into a surgeon’s office.”

Still, these decisions can be life-altering and knowing what’s best for yourself or what you’ll be comfortable with five years down the road can be hard to ascertain in short order when you’re facing mortality. The key, Clark says, is to give yourself some time and space to think. “I caution women not to make long-term decisions just because they’re in this rush to get the cancer removed.” Yes, you need to move with some speed after diagnosis to deal with the cancer, but it’s also critical to “really think it over. You have a little time before you have surgery, so take some time to really think through this decision.”

[See: What Not to Say to a Breast Cancer Patient.]

If you opt to go flat and then later decide you would prefer to have a reconstruction, it’s possible, but that procedure can be more challenging and result in less aesthetically pleasing results. When a patient goes flat, the excess skin that used to cover the breast tissue is removed. Coming back later to reconstruct will require the insertion of a tissue expander to create a space for an implant or fat tissue to create a breast mound. In some cases, the patient will need to have skin and tissue removed from the abdomen and transferred to the chest to create the reconstructed breasts, and this typically results in a color mismatch – the belly skin that’s transferred is typically paler than that of the chest, Clark says. Therefore, it’s preferable to make the decision and stick with it, but there are options for changing your mind later. Talk them over with your surgeon.

For anyone facing surgery to remove breast cancer, know that you have options for what happens afterwards. Speak up if your doctor seems to be making assumptions on your behalf, and take a moment to consider what fits with your values and worldview. Listen to your inner voice and discuss the pros and cons of all your options with your doctor. You can also seek input and assistance from a support group. Many members of online groups like Flat and Fabulous and Beyond the Pink Moon have already completed this fraught calculus and may be able to help you understand what’s best for you.